Plasma treatment, so-called plasma deflash, is an effective way which can completely remove the EMC residue and is harmless to the beneath materials, e.g. copper, nickel, gold, solder, silicon oxide and silicon. 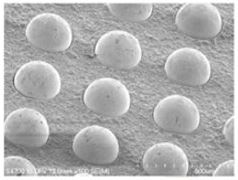 For fan-out process, stacked molded IC, Package-On-Package(POP) assembly, can increase the functionalities and reduce the form factor. Laser drilling is an effective way to form the Through Mold Via(TMV), especially in a large area. But usually EMC residue, so-called smear left at the via bottom will degrade the solderability in the subsequent reflow process and induce the early failure of this IC.

Plasma treatment, so-called plasma desmear, is an effective way which can completely remove the EMC residue and is harmless to the beneath metal layer, e.g. copper, nickel, gold and solder. Plasma desmear is also helpful to widen the process window of laser drilling, to prevent the damage of bottom metals and raise the drilling throughput.